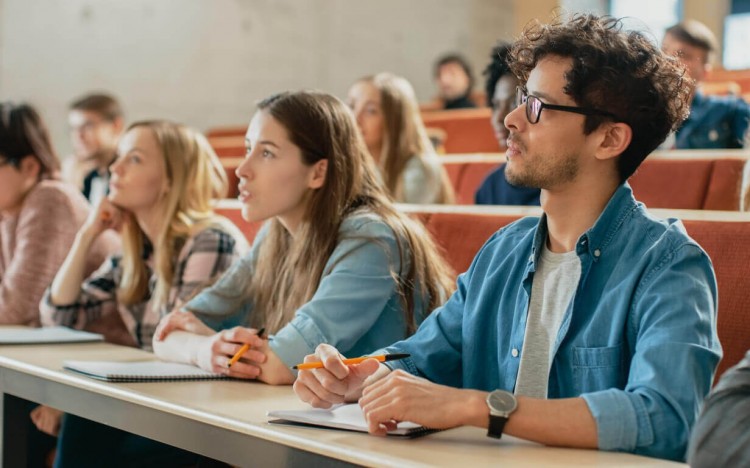 The GMAT test is more than just a series of quantitative and verbal questions.

For some, it’s the springboard to a top quality MBA program. For others, it’s the first step on an exciting path of career change.

For business schools, a top GMAT score will make a very strong case for your seat in the MBA class, proving the mathematical and verbal dexterity to set you ahead of the crowd. Often, the better-ranked the school, the higher the average GMAT score.

Each year, we highlight the average GMAT scores for the world’s top-20 programs according to the Financial Times.

2018’s results saw Chicago Booth topping the list with a whopping 738 GMAT average, with Stanford Graduate School of Business, often the leader, close behind on 737.

This year, we find a four-way tie at the top, all with an average GMAT score of 732.*

US schools on top

The US, as expected, dominate the top of the table in terms of rankings and average GMAT scores.

Ivy League heavyweights University of Pennsylvania Wharton and Columbia Business School join Stanford at the top, along with the lower-ranked Kellogg School of Management at Northwestern University in Chicago.

Kellogg’s GMAT aptitude is notable, beating 10 of the 13 schools above it in the FT rankings. Its 732 average remains the same as 2018, showing the strong and consistent standards it sets its applicants.

Columbia and Wharton will both be satisfied, both trumping their 2018 scores and outperforming their east coast competitors. Columbia’s score, in particular, has risen eight points from 724 in 2018.

Wharton’s admissions department, moreover, looks beyond the obvious candidates with the highest scores. The lower score of 500 in their GMAT range, the lowest among any school in the top 20, demonstrates the opportunities for those who might not perform exceptionally in the GMAT.

Rounding out the Ivy League group, Harvard Business School and Yale School of Management sit close behind on 730, with Tuck School of Business at Dartmouth trailing on 722.

Chicago Booth, although performing outstandingly with a score of 731, plunge seven points from the lofty heights of 738 which they reached last year.

While coverage of US schools’ diminishing applications has been widespread, one thing is clear—that the US continues to attract the best and brightest.

The US schools still receive nearly half of all applicants, with European programs receiving a fraction of the number for their MBA programs. Attracting fewer applicants, European schools must accept students with lower GMAT scores.

At the top, INSEAD and London Business School are practically neck-and-neck on 709 and 708 respectively—performing well as the only two European schools in the top 10.

Their averages are consistent with their 2018 scores. It is, however, particularly impressive for INSEAD as it must be noted they have one of the largest MBA intakes in the top 20, with over 1000 seats in the classroom.

Elsewhere in the UK, at the prestigious Oxbridge institutions, Cambridge Judge scores 693, narrowly beating Oxford Saïd with an average of 690.

Two of Europe’s top schools rank next to the Oxbridge schools, with HEC Parishitting 690 and IESE Business School in Spain close behind on 686.

While US application numbers are falling, Asia is on the rise—and their increasing GMAT averages demonstrate the high caliber of student they are beginning to attract.

All three Asian programs in the FT top 20 have seen a rise in their GMAT average. The biggest comes from the MBA program at HKUST in China, which has risen 10 points up to 680.

The National University of Singapore has also seen impressive gains, increasing by five points to 667, despite having the lowest average GMAT in the top 20.

Continuing to dominate the Asian market, however, we find CEIBS, the joint venture between Chinese government and European Commission, that now sits fifth overall in the FT rankings.

With an average of 685, and a strong GMAT score range of 640-to-740, CEIBS is clearly beginning to challenge European and US schools for top candidates.

What is a good GMAT score?

If you’re applying to a top MBA program, aiming for the class average GMAT score is a good way to start.

Average GMAT scores are increasing, so you’ll need to be ready for the challenge. Consider your test prep options and practice GMAT sample questions.

At the same time, GMAT ranges vary. You don’t always need to score over 700 to get accepted. But you’ll need to demonstrate your quantitative ability and academic strength elsewhere in your application.

Business schools look at your profile as a whole, but the GMAT remains an important factor.

How to Pursue an MBA from AIMS Bangalore?

Undoubtedly, Masters in Business Administration is the most preferred post-graduation course amongst the students regardless

For Anirudh Singhania, a one-year MBA was the perfect stepping stone to a new career

SC notice to Centre, AICTE on regulating MBA courses of all institutions