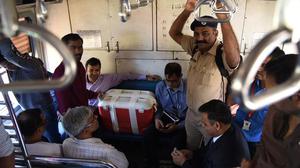 An advocate opposing the 16% Maratha reservation on Friday rebuked the State Backward Class Commission (SBCC) report and said that the sample size taken was inadequate and three of five the institutes conducting the survey have political affiliations.

A Division Bench of Justices Ranjit More and Bharati Dangre was hearing a bunch of petitions for and against the reservation in jobs and education for Marathas, since the beginning of the month.

Advocate Pradeep Sancheti, appearing for petitioner Sanjeet Shukla, is the third to argue against the reservation. Mr. Sancheti said that all the five organisations that conducted the survey on Marathas took a very small sample size and did not possess any technical expertise either. Three of the five also had political affiliations, he said.

Mr. Sancheti said the State government did not do a proper background check on Gokhale institute, Rambhau Mhalgi Probodhini, Shivaji Academy, Sharda Academy and Gurukrupa Sanstha before deciding to give them the task to study and put forward the education and professional backwardness of the community.

“Not one of these institutions had any prior experience of having conducted such a large scale and important survey. How could the SBCC have relied on their survey reports?” he asked.

However, senior counsel V.A. Thorat representing the State government questioned if the petitioners were suggesting that the Commission was baised, and on what basis they were making such insinuations.

On Thursday, Mr. Sancheti said the SBCC had relied on the survey results of only 43,000 members, so its findings did not reflect the condition or social status of the entire Maratha community, as they constitute around 30% of the total population of the State.